Cool, very cool.  This 89% Chardonnay with 7% Pinot Gris and 4% Gamay bubble is a hand-crafted gem by BC’s own Anthony Buchanan with only 2,500 bottles made.

Stopped with a crown cap, this sparkling wine is light gold with a soft mousse and delicate aromas of green apple, Asian pear, blossom and green meadow. 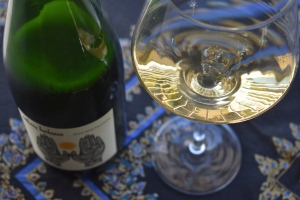 The palate is dry with food friendly acidity, and flavours of lemon meringue, and yellow apple.

At only 11.5% abv., this is wine you can enjoy all day long – with brunch, lunch, or pretty much anything.  The delicate flavours and aromas also help it pair with many dishes.  We had ours with freshly made prawn spring rolls and pad thai.

Open it carefully!  That crown cap pops off

quickly.  It’s all fun and games until someone loses an eye.

This one is no exception to the rule I tend to follow for handcrafted, artisan spirits.

Made from 100% BC honey instead of grain, this gin is also gluten free.  What is this sorcery, you ask?!  Yes, the honey is fermented into mead, which is then distilled into spirit, and with vapor infusion, it becomes this gin with its beautiful tapestry of aromas and flavours.

The Wayward Distillery gin has only a very light touch of juniper, with lavender, green herb, and bergamot.  The palate shows all of these – in addition to a splash of sarsaparilla.

This was a 2016 gold medal winner at the Vancouver International Spirits Competition, and won a silver at the 2018 Canadian Artisan Spirit Competition. 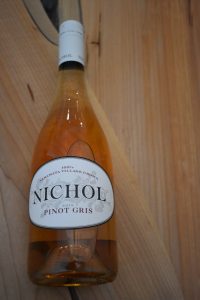 ‘Fess up, all you Covid-19 drinkers.  I know you’re looking for daily drinker wines to stock up on, just in case.  Even if you’re not, here is one you should put in an order for ASAP.  I have actually purchased 7 cases of this one, so…

This wine is gorgeous with an absolutely heart-wrenching shade of onion skin – the direct result of having spent up to 36 hours on its skins.  Yes, it’s a white wine, but looks like a rosé with aromas of white peach, apricot, and a little ginger blossom.  Let it warm ever so slightly to open it up.

The palate is dry but juicy, with flavours of yellow peach, kernel, ruby grapefruit pith, and a saline minerality.  On the back end, there’s a lengthy ripe honey crisp apple finish to the whole experience. A scratch of ever-so-light tannin enables the food friendliness of this wine.

With its fabulous mouthfeel, it’s super food friendly and partners graciously with all sorts of dishes including salad greens, chicken, fish, egg, and pasta.  In fact, it goes with almost everything, including nothing but a deck chair and a book.

‘Accustomed to the Dark’ is another red wine, home run hit by winemaker Rajen Toor.  The guy is not only crushing it with his wines, he’s seriously poetic when it comes to naming his creations.

This time, the wine has been named for the title of an Emily Dickinson poem written in 1862 about fear of the future, or of the unknown.  How oddly prescient is that – considering the times we’re living in, and what our global society is experiencing.

This wine was fermented in stainless steel and aged for a year in mostly neutral vessels with 10% new Russian oak. 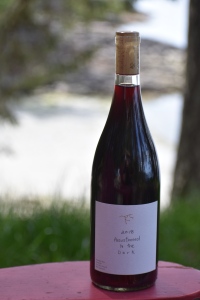 A seriously deep but translucent ruby, the wine is a little hazy as it hasn’t been fined or filtered.  The aromas are rich with damson plum, cassis, and ripe blackberry.  The juicy palate is dry with more Okanagan plum, field berry, baking spice and a layer of toasted biscuit knitting it all together.

Whether she wrote it about the loss of a lover, or her eyesight, the stress of experiencing the American Civil War that was raging around her, or something else, Dickinson’s poem is ultimately about resilience and perseverance in the face of difficulty.

‘Accustomed to the Dark’ is an ode to the resilience of the human spirit.  Its lesson is definitely something we can all take some strength from at this time, as we grow a little more comfortable with the unknown, and with change.

*This wine was provided gratis…

Callisto was discovered by Galileo in 1610 and is the second largest moon of Jupiter after Ganymede.  It’s also the third largest moon in our solar system.  I’d had no idea about this – until I drank this wine and wondered about the naming convention.

But!  I learned that Callisto was also a nymph – daughter of Lycaon, King of Arcadia.  She was transformed into a bear and then turned into a constellation.  Ahhh, hello Ursa Major, or ‘Great Bear’ wines.  I get it now.

This wine was a wild ferment in oak barrel with 10 months in French oak and then stainless steel for 3 more after that.  It has been lightly fined, but was not filtered.

It’s got a golden hazy tone with a nose so heavenly, I just enjoyed it for the first 20 minutes.  The aromas show canned Bartlett pear, Ambrosia apple, clover honey, and as it warmed, soft oak.

The flavours are beautifully developed and sherry-like when first opened with jasmine and ripe apple tart brushed with lemon.  As it warms in the glass, creme caramel, white pepper and wooded spice fill the glass.  The lengthy finish shows coconut cream pie.

Unctuous and deep, yet balanced and juicy, if this is what 13 months of age does, sign me up for more.  Only 125 cases of this were made, so run to your closest Cascadia liquor store in BC, as it will surely sell out.

This wine was made at the Okanagan’s Desert Hills Winery on Oliver’s Black Sage Bench by the inimitable Rajen Toor.

*This wine was provided gratis 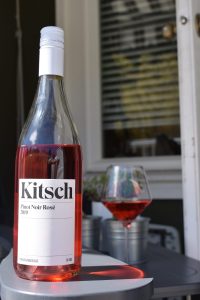 It used to be said rosé was a wine that could only be enjoyed during the summer, and because it’s pink, usually by women.

Let’s resolve to be neither seasonally prejudiced nor sexist when it comes to drinking.  Equal opportunity all the way!

So, you can drink rosé any darned time of year you like.  But this one will definitely remind you of the summer that is almost upon us.  And yes, I’ll personally guarantee that everyone is going to want to drink this.

Straight from the slopes of East Kelowna comes this drink with its stunning shade of watermelon pink, nose of Swedish berries and red rose petal, and a very slightly off dry

If you like to imagine streamers, confetti, and noisemakers when it comes to what you’re drinking on the patio, this wine is for you – it’s a delicious, socially distanced party in a glass.

This wine was provided gratis.

Sémillon is usually paired with other white grapes, most especially Sauvignon Blanc as in the classic white wine of Bordeaux.  However, this is a 100% Sémillon version from vines planted in 1993 near Kelowna, BC in Canada’s Okanagan region.

Ever so slightly cloudy because it’s unfiltered and unfined, this delicate wine is pale lemon

The palate is dry with mouth-watering, ‘take another sip’ acidity.  Flavours of lemon peel, bergamot, white tree blossom, and yellow grapefruit on the rocks show through, with a drop of clover honey on the back end when it warms.

It’s a versatile bottle of white that is guaranteed to go with virtually any of your salads, fish, chicken, pasta or egg dishes.