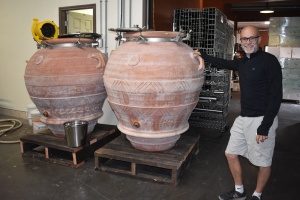 Located just outside of Courtenay in the Comox Valley, 40 Knots was purchased in 2014 by its current owners – Layne Robert Craig and Brenda Hetman-Craig – who immediately set about making significant changes to vineyard management focusing on regenerative agriculture, and acquiring gold-level Sustainable Tourism certification.   Their Dall sheep, Pinot and Gris, are responsible for mowing and ground cover, while the gaggle of geese take care of the weeds and bugs.

Layne claims it was a purchase that was ‘meant to be,’ since as a former pilot, his plane

had a stall speed of 40 knots, so the winery’s name had real meaning for him and his family.

However, one of the most interesting things  about this winery is their decision to age an increasing percentage of their wines

Now, ageing wine in clay is not a new idea – it’s been around for about 6,000 years.  However, it’s not necessarily attempted by that many winemakers – the amphorae can be expensive (whether made of clay or concrete) and let’s face it – the shipping can be a pain.  It also seems that during a global pandemic, sometimes getting one’s order filled can be, well, impossible.

But why pick clay over oak or stainless steel?  The former allows for oxygen to reach the wine and tannin from the wood can affect the wine as well, whereas the latter offers an oxygen-free environment and doesn’t impart any flavors into the wine.  Terracotta clay is porous like oak so allows oxygen to affect the wine’s texture, but like steel, it’s neutral and doesn’t impart flavours.

40 Knots is not ageing everything they produce in amphorae, but Layne is not afraid to experiment with options and alternatives.  This is evident in their wide array of offerings ranging from bubbles, to oaked and unoaked whites, reds of all stripes, and some unique dessert and port-style treats.  Just as an example, the Trie Emily is a vin de curé made from dried grapes.  Yes, essentially a strohwine on Vancouver Island.

You can purchase 40 Knots Estate Winery products at the winery, on Vancouver Island at private wine stores serviced by Storied Wines and Spirits, and throughout BC’s Lower Mainland.

I love wine...and finally decided to do something about it.
View all posts by winellama →
This entry was posted in OTHER and tagged 40 Knots Estate Winery, Amphora, BC, Brenda Hetman Craig, Canada, Comox Valley, Layne Robert Craig, red wine, Storied Wines and Spirits, Terra Cotta Amphorae, Vancouver Island, white wine. Bookmark the permalink.