I will say it’s interesting that they grow Zinfandel as there are so few places growing it in the Okanagan.  Native to Puglia, the back calf of the boot in Italy, and also the quintessentially Californian red, Zinfandel is unusual for BC.  It demands a lot of heat to ripen and after this bottle, I remain unconvinced.

This wine shows ripe raspberry, blackberry, anise and licorice. There’s also lots of baking spice and clove as well with a medium garnet core.  The finish is disappointing though and the alcohol hot – unbalanced.

Only WSET Acceptable, we drank it with BBQ chicken and spicy spaghetti. 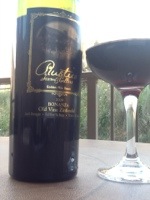 I love wine...and finally decided to do something about it.
View all posts by winellama →
This entry was posted in BC, RED, Zinfandel and tagged BC, Bonanza, Golden Mile Bench, Okanagan Valley, old vines, red wine, Rustico, zinfandel. Bookmark the permalink.