In summer 2015, I’d planned a visit to New York’s famed Finger Lakes AVA which I couldn’t follow through on.  However, I was able to snag this bottle via my favourite online wine sales company later that year.

Do they really grow grapes in northern New York state?  Yes, and they even make some pretty darned good wine there too.  Grapes (albeit, originally not the kind you necessarily want to make wine out of) were planted back in the early 1800s in this region that encompasses 11 lakes resembling long fingers etched by glaciers.

The ‘lake effect’ modeled by the bodies of water mitigate the harsh continental climate much as is done to the west in Canada’s Niagara region where award-winning Chardonnay and Pinot Noir is grown.  Here in the Finger Lakes, Riesling dominates a landscape that also includes Chardonnay, Pinot Noir and Gewurztraminer.  There are also wines made from less noble, but still tasty, hybrids Cayuga and Vidal in both regions.

On the eyes, this wine is pale lemon with aromas of citrus, pear, lychee and light petrol.

The palate is lightly off dry with medium acidity and flavours of Bartlett and Asian pear, pomelo and petrol with some minerality. 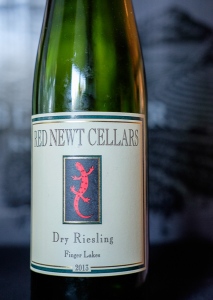 WSET Good – a perfect brunch wine with quiche, fruit salad and sausage.  I was slightly disappointed by the low acidity which I had expected to be much juicier.