I realized three things about Champagne after arriving there and having only studied it out of books up until that point.  First, it’s not actually that big.  Second, the Montagne de Reims is a misnomer – more of a large hill than a mountain in my humble British Columbian coastal range opinion. And third, the region is simultaneously stunningly beautiful and filled with friendly people.

It’s very easy to get around and nothing is too far away to get to quickly. We stayed just south of Reims (pronounced as ‘Prince’ in French, but without the P) in tiny Trois Puits, spent time to the south in Epernay and Cramant, drove to Dizy and Bouzy and this stop was just east of Epernay in lovely little Aÿ.  It never took more than 20 – 30 minutes to drive anywhere.

We had arranged ahead of time through a WSET Diploma colleague Jodie Estens and her company ‘That’s Life!’ to meet the grower-producer winemaker brains behind the operations at René Geoffroy, Jean-Baptiste Geoffroy.

A fifth-generation winemaker whose 14 ha of Premier

Cru vineyards are to the west in Cumières close to Hautvillers (of Dom Perignon fame) in the Vallée de la Marne, his 120-140,000 bottles per year focus on Pinot Noir and Pinot Meunier with some Chardonnay thrown in for good measure.

His champagne house in Aÿ is gravity fed, has 100m long cool caves located far below the house carved into the tuffeau and is happily overrun with his five adorable daughters who kept popping in and out with friends to check on things with their doting dad.

Jean-Baptiste is a man of great verve. He was extremely busy the day we arrived, hand disgorging about 40 bottles and preparing the liquor d’expédition for the batch that was being bottled on the mobile assembly line at the back entrance.

But as we proved more than happy to follow him around and observe his every move, he was willing to share glimpses into processes I’d only ever read about. We learned about traditional hand disgorgement, mixed the liquor d’expédition, watched the bottling process for the upcoming season’s New Year wines to prepare them to lie down and ‘marry’ for the next six months, and followed him deep into the labyrinth of caves below the production facilities.

Jean-Baptiste led us through a tasting of 6 champagnes as well as the Ratafia (similar to a Pineau de Charentes but from Champagne, made with unfermented Pinot Meunier juice, blended with brandy and 18% abv). One bottle we purchased was the traditionally corked ‘Cumières Rouge’ Coteaux Champeneux, unfined and unfiltered Pinot Noir (picture below and the flagship picture for Winellama.com). 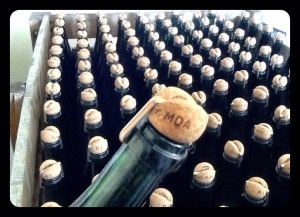 Jean-Baptiste avoids malolactic fermentation in his wines and this adds to their complexity and longevity. We tasted the NV Expression, the Pureté, the Empreinte 2007 (it’s not a vintage wine, but all the grapes are from 2007 and from Cumières ‘ chalky soil with pastry and fresh bread on the nose and palate) and the Volupté 2007 which is 80% Chardonnay and is said to be perfect with Parmesan and goat cheese (I brought a bottle back to check if this is true.  It is.).

The tasting and banter was fabulously enjoyable; Jean-Baptiste is justifiably proud of his wines. During a discussion about the merits of small grower-producer Champagnes versus large, marque houses, we agreed terroir and vintage variations add excitement to champagnes produced by small houses, “I am the first consumer of my champagne.  I taste it every day. If it was the same, it would be very boring…I don’t make coca-cola!”

There are certainly no cookie cutter wines here. Unique champagnes with pastry, citrus, and apple tones – especially with the Extra Brut V 2004 (71% Chardonnay, 29% Pinot Noir), an outstanding version of brioche, lemon drop, ripe apple and bread aged in 100% oak barrels to round its full flavours and body. 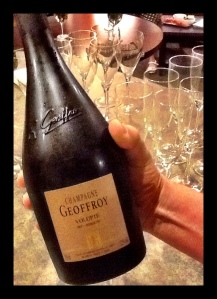 The Rosé was a favourite – a 100% saignée (he never presses) and complex champagne with 10g RS/L (although imperceptible) and tasting of crisp watermelon, strawberry and red pepper with floral spicyness.

It’s clear serious love for grape growing and winemaking pervades Jean-Baptiste Geoffroy’s being – he signals this with each move to share a new wine, demonstrate a procedure, share some information. Combined with his generosity and patience, this renowned grower-producer is at the top of his game.

Look for Jean-Baptiste’s Recolant Manipulant wines in BC and across Canada as well as around the globe.