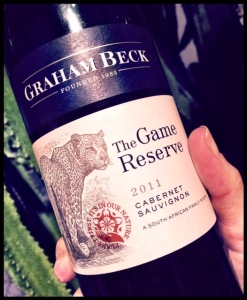 The Western Cape is a very large geographical unit that encompasses most of the eastern wine lands of South Africa – including the Breede River Valley, the Coastal Region, Klein Karoo and Olifants River.  It’s massive.  Enormous.  And there’s a lot of wine that comes from the region.

In the past, most of it wouldn’t have had much of an international following – much of what was exported from South Africa to the rest of the world was either fortified or on a critter label and it usually arrived in foreign ports in bulk, not bottled.  But much of that is changing as today’s South African wine scene is improving rapidly.

This version (which does, admittedly have a critter on its label!) is a deep ruby with medium plus intense aromas of field berry, light, sweet tobacco, clove and minty herb.

The palate is dry with average acidity and light tannins with a small bit of grip.  The flavours are medium plus intense and show plum, cassis, more field berries, cigar box and tobacco, leather and earthy herbs.

With its medium body but light mouth feel, this is a WSET Good wine with an accessible price point that’s drinking well, but not suitable for the cellar.

We enjoyed it with a lightly spicy and rustic chorizo and veggie stew accompanied by a fresh salad and egg noodles that enlivened the light tannins.