The first thing Doug said when I met him was ‘I only drink vodka and Californian wines’. 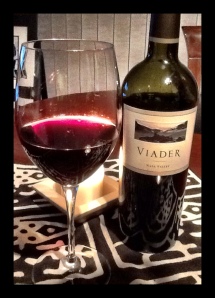 Who says that?!  Then he sent me a bottle of Viader.  Now at least I understand the method of his madness – at least for the wines part.

Viader is one of those perched-on-beautiful-Howell-Mountain-east-of-St.-Helena-Napa-Valley-wineries that has had much success since its inception in 1986.  Producers of organically grown Cabernet Sauvignon and Cabernet Franc grapes on hand-tended vines, they pride themselves on the get-up-and-get-them spirit of founder, Delia Viader.

Her children and their spouses remain an integral part of Viader’s operations to this day where the vines are planted as in the Douro – on an east-west axis up and down the hillside to maximize exposure to the sun and minimize soil erosion.

The wines are unfined and unfiltered – music to my ears.  Formed of 55% Cab Sav for structure and black fruit, and red fruit and perfume from the Cab Franc 45%, they are grown at Viader’s volcanic, loam soil vineyard in Deer Park at an altitude of 396m.  The grapes have a yield of about 50 hl/ha.

The first challenge was with a dry cork that broke, but after a little TLC and some careful decanting to avoid any deposit and corky bits, we got down to business.  The wine is a clear and bright, medium intense garnet colour with a thick garnet rim and plentiful legs (the picture is a little off).

The nose is clean and developed with medium plus intense aromas of dried black and red fruit – blackberry, raspberry, plum, prune and raisin – with clove and nutmeg spices, marzipan and roasted nut.

The palate is dry with high, but completely unnoticeable, alcohol and silky tannins.  Acidity is still medium plus and the flavour profile has an evolved medium plus intensity with deep and rich dried black and red fruit – plum, prune, dried blackberry and black raspberry – leather strap, dried tobacco leaf, clove, nutmeg.  The finish is long.

This wine is delicious – perhaps slightly past it’s prime, but still dreamy at 13 years old.  Balanced, complex, elegant, structured but restrained, developed and with integrated tannins.  WSET Very Good+; drink now if you still have any.

Now I know why Doug treasures his Californian wines.