So often, the terms, ‘excellent’, ‘outstanding’ and ‘first class’ are bandied about and used with regard to less-than-stellar wines. 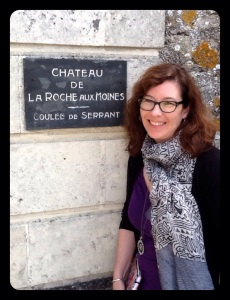 This is from the Clos de la Coulée de Serrant, a vineyard of only 7 ha in Savennières on the northern bank of the Loire River, originally planted by Cistercian monks in the 1100s. The remains of one of the earliest buildings is still there on the grounds.

Owned by Nicholas Joly of biodynamic revival fame and arguably the world’s premier Rudolph Steiner devotee, the wines are coaxed along these days by his daughter, Virginie. 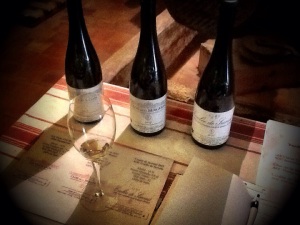 I say coaxed because upon our arrival, she appeared and greeted us in the foyer where the tasting was to be. It was hard not to be awestruck – I mean, this is the winemaker of the Coulée de Serrant standing before me.

Introducing her to my husband, I stumbled over the words, ‘This is Virginie Joly – the winemaker.’

She laughed and protested modestly, ‘Oh, I simply help put something into the bottle.’

And this is one reason why the Joly wines will always be so renowned; the best

winemakers are modest and recognize their role comes after what happens in the vineyard as a result of the highest of viticultural standards and the best terroir (these vines have been farmed biodynamically since 1980).

They were bottling that day and Ms. Joly had to go – there were some difficulties with the line. But we were invited to walk the grounds, enjoy the tasting (they were pouring all three of their 2009s that day) and ask as many questions as we could think of.

This five year old wine was made with 100% Chenin Blanc grapes that were harvested in 5 passes through the vineyard and at a yield of about 25 hl/ha.

It is clear and bright, a shade of harvest gold with pronounced aromas of deep honey, dry hay, ripe quince and yellow apple, ginger, dusty cinnamon and fig.  The wine also shows sherry-like savoury notes and a strong earthen minerality.

The palate is dry with medium plus acidity and although the alcohol is high, there is absolutely no evidence of it on this wine. It has a medium body and the layered flavours include deep clover honey, honeysuckle and hay, more savoury schist and earth, ripe yellow and red apple, yellow plum figs, cloves and dried ginger.

The finish is very long on this deeply complex WSET Outstanding wine.  It could be kept an additional 5-7 years at the very least.

I opened this wine when it was 6 years old, but I almost wish I’d waited longer to see what would have happened over time.  If I had been patient enough, I know exactly what I would have paired it with to tease out all the complexity of this delicious drink – pork rillette with quince chutney and roasted chesnuts on crostini.

I know it would have carried me back to that magical day when we met Virginie Joly in the Loire.