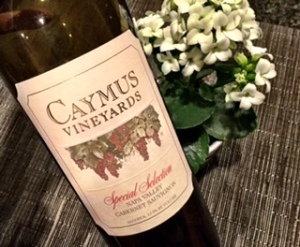 If you were going to write about a classic Napa Cabernet Sauvignon, this would be the one to write about. This bottle was 22 years old when we opened it.

Think about that for a minute.  Twenty-two years ago in September 1994, someone was harvesting the grapes that were fermented into wine, that eventually went into this bottle.

What kind of day was it?  Who was working the harvest and checking the grapes at the winery?  Are those people still alive?

The cork broke badly when we opened this up, which made us a little nervous about its provenance.  But thankfully, it seems to have been stored in reasonable conditions – although perhaps not on its side (which would have likely resolved the dry cork issue).  No problem – I just got out my antique wine strainer – and was glad to see it actually works.

The Special Selection is Caymus’ most famous bottle and has produced since 1972.  Twice, it has been awarded Wine Spectator’s wine of the year title.

On the eyes, deep garnet with initial aromas of ripe, August blackberries and after some time and decanting, blackcurrant, black pepper and salami.

The body is dry with viscous legs and tannins with the lightest grip.  Flavours include more black fruit with dry meat, green pepper, tobacco leaf, campfire with ash and cocoa.

WSET Very Good; if you have a bottle, drink now and don’t hold any longer.  I’d say there is probably some justification for that twice awarded Wine of the Year title.

I love wine...and finally decided to do something about it.
View all posts by winellama →
This entry was posted in Cabernet Sauvignon / Blends, California, RED and tagged 1994, Cabernet Sauvignon, california, Caymus Vineyards, napa valley, red wine, Special Selection. Bookmark the permalink.