This wine first caught my eye because of the way it listed its varietals in an ever-so-slightly backward manner. Instead of the usual GSM, indicating dominance by Grenache, followed by Syrah and Mourvedre, this one has a majority of Shiraz (45%) with 35% Mourvedre (called Mataro in Australia) and 20% Grenache.

Maybe it just seemed backwards because it’s actually upside down – isn’t that what happens in Australia? Because it’s still wrong – it should be SMG, shouldn’t it?

Well, regardless, there is nothing backward about the taste and bouquet of this wine. It hails from the famed Barossa Valley in South Australia, ‘The’ Australian wine state. Barossa is a very small parcel of land, but it dominates production and output for the South Australian region (about 50%). Most vines are concentrated in the south-eastern corner of the region near Adelaide.

The Barossa is located an hour north of Adelaide and vies with the Hunter Valley (just outside of Sydney) as Australia’s best known wine region. Evidence of German immigrants abounds but most Riesling production has since moved to the close by Eden and Clare Valleys while concentration on red wines has focused on the region’s warm valley floor. After all, this is where Penfold’s Grange is from.

There is an issue though in the area with increasingly less water and there has been much focus on dryland irrigration of the bush pruned vines with low yields – some as low as 16 hl/ha. Some of the vines hail from the late 1800s while there are also many newer arrivals (there are about 80 wineries in the region).

The Shiraz that comprises 45% of this wine is the king of Australia’s red grapes. The wine is clear and bright and a deep, opaque purple with legs. The nose is clean and developing with medium plus aromas of blue and black fruit, blackberry pie (with vanilla), mocha, eucalypt, some pomegranate and a touch of kid glove as it opens.

The palate is dry with medium plus acidity, ripe medium plus tannins and medium plus alcohol. The medium plus flavour characteristics include more blueberry, blackberry along with cranberry and raspberry. The eucalyptus is still present along with an unmistakeable chocolate note with light leather, vanilla and spice cake. The finish is medium plus.

This is a WSET ‘good’ wine with a fruit forward feel and some leather and mocha on the back end. Not entirely seamless, it is certainly reasonably complex. Drink now and enjoy or save for 2-5 years. 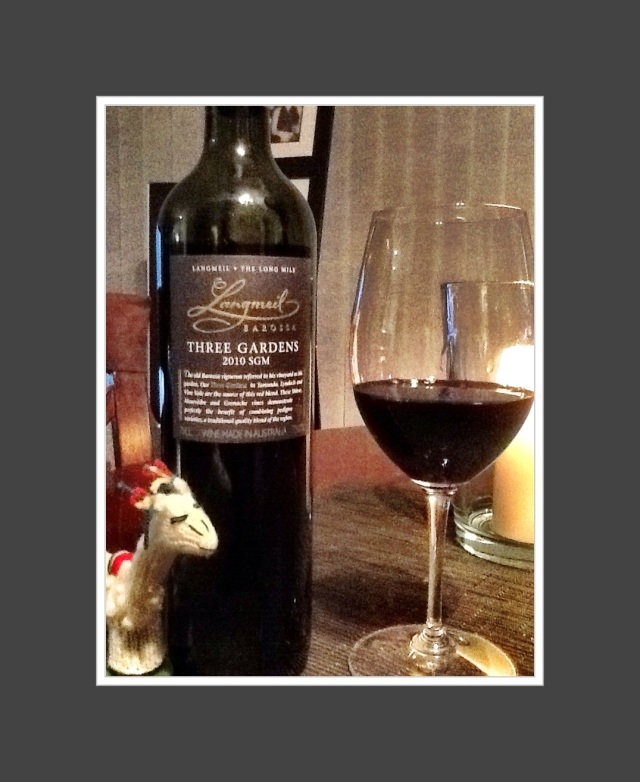 I love wine...and finally decided to do something about it.
View all posts by winellama →
This entry was posted in Australia, Grenache / Garnacha, Mouvedre, Monastrell, RED, Shiraz / Syrah. Bookmark the permalink.