“If I was going to drink wine, this would be it!” When a non-drinker announces his impression of a wine’s aromas in this way without having even tasted it, you know it really must have something going for it.

Located deep in the Southern Rhone Valley, Chateauneuf-de-Pape or CdP is famous for a few things – including being the very first French appellation and for allowing up to 13 different red and white varietals to be included in its wines.

Referred to as ‘Vin d’Avignon’ in the 1700s, CdP literally means the ‘Pope’s New Castle’ and was named as such because in the early 1300s the papal court moved to the region, set up in Avignon and planted vines. Its reputation for wine ( a lighter version of today’s product) grew until phylloxera hit in the 1870s and the vineyards were destroyed (along with all the others located throughout Europe).

Rebuilding the vineyards into the early 1900s was difficult and financially taxing but by 1923, rules were drawn up for planting and the prototype for Appellation Contrôlée system was established right here in this region. This included a geographical delimitation of the land allowed to be used, imposing a minimum alcoholic strength of 12.5% (still the highest in France) that must be achieved naturally and not by adding sugar, triage picking (to ensure ripe fruit) and the outlawing of Rose wine (to show up their neighbours in Tavel). The yields are limited to about 35hl/ha which ensures concentrated and sweet fruit.

The reds allowed in CdP wines include Grenache (the most popular one here), Syrah, Mourvedre and Cinsault as well as lesser knowns Picpoul, Terret Noir, Muscardin, Vaccarese and Counoise. For the rarer whites (only 1/14 of the distinctive embossed CdP bottles are white wine), Grenache Blanc, Bourboulenc, Roussanne and Clairette are legal.

CdP tends to be fairly flat but is riddled with pebbles called ‘galets’ which retain the day’s heat and radiate it back to the ‘gobelet’ or bush-trained vines at night – ensuring the rich, concentrated fruit the region is renowned for. The soils in the ‘eclats calcaires’ are shallow and based on crumbling limestone which means the roots don’t go very deep but can obtain water from cracks in the limestone.

This CdP is Grenache-based with Syrah and Mourvedre. Clear and bright it is a deep garnet with legs. On the nose, it’s clean with developed, medium plus intense aromas of deep lush black fruit, bacon fat, leather saddle and roasting herbs.

The palate is dry with medium plus body, medium plus alcohol and medium acidity. The medium tannins are soft and ripe and support the medium plus intense flavours of black currant and blackberry, strong tar and leather, thyme and rosemary, salami and cured meat along with peppery notes. The wine’s finish is long and savoury.

A WSET high end of ‘very good’ wine – beautifully balanced with lush fruit and a long finish. The tannins are perfect right now and are supported by the medium acidity. Drink now and lots of it – or may hold another 2-5 years. 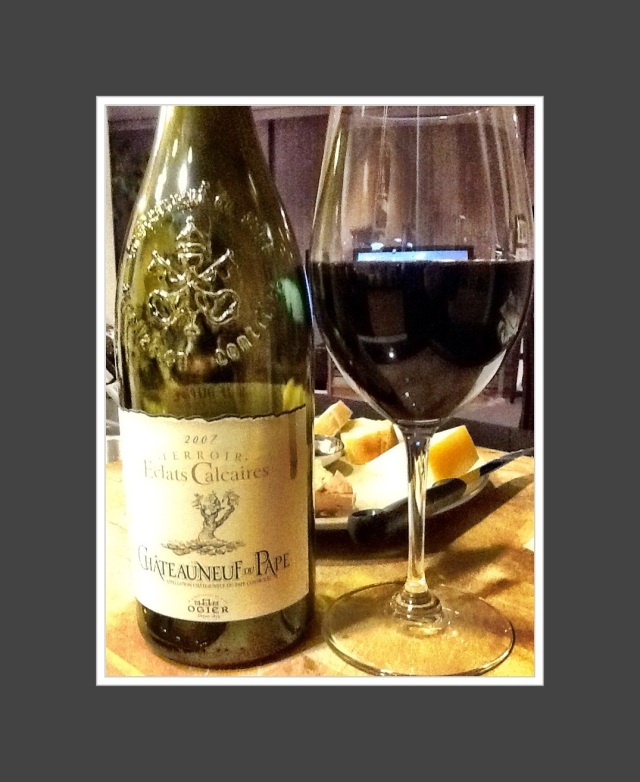 I love wine...and finally decided to do something about it.
View all posts by winellama →
This entry was posted in France, Grenache / Garnacha, Mouvedre, Monastrell, RED, Shiraz / Syrah. Bookmark the permalink.