Warm and friendly, comfortable and low-key, yet classy and top notch wines. This is the Walla Walla Valley AVA.

Walking down Main Street, we started getting a little concerned; apparently Wednesday is everyone’s day off in Walla Walla. However, as we closed in on the tasting rooms on the ground floor of the old Marcus Whitman Hotel, we breathed a collective sigh of relief (okay, well at least I did).

Walking into Trio Vintners, we were met by winemaker Karen La Bonte. She’s never met an Italian varietal she didn’t like. Sangiovese and Barbera along with Syrah, Grenache, Mourvèdre and Zin are all happily ensconced in this lovely little tasting room. With a total production of approximately 1500 cases a year, she has been making wine since 2005 and we can be thankful for that; it’s great stuff. We devoured the 2007 Mourvèdre, Yakima Valley, 13.8% abv, only US$26 with homemade spaghetti and sauce at the Ranch (see picture below with chef Michelle).

Right next door to Trio we met Pearl who was running the tasting bar for the equally boutique Locati Cellars. Located 7 miles west of Walla Walla, the Cellars for Locati are actually on the Oregon side of the state border. Starting with a 2011 Pinot Grigio (my gums were relieved – we’ve been drinking a lot of tannic reds), we enjoyed a 2011 Estate Sangiovese Rose (buy this bone dry beauty with strawberries and pimento), 2008 Sangiovese, 2008 Barbera and their flagship, the 2009 Innovation, a 50% Sangiovese with 25% each of Cab Sav and Barbera. A phenomenal medium plus garnet with berries, bramble, spice, licorice, cedar plank, forest floor and some green pepper.

Stumbling (no, really I was spitting like a good llama) next door we met the lovely about-to-give-birth Ashley Trout, winemaker for Flying Trout and also Tero Estates (Doug Roskelly is the other vintner in this venture). Wow. Producing 2000 cases per year, we were extremely impressed with the four we tasted. I left with the Deep River Red Blend which practically jumped out of the glass screaming fresh raspberry preserve with green tea tannins, leather, liquorice and leaves. I cannot wait to drink this wine. All by myself. Oh yeah. A separate note will definitely follow.

We also tried the 2010 Cutthroat Blend, a 62% Syrah and 35% Malbec blend – herbs and red berries and reminiscent of a ‘walk through a Moroccan bazaar’. I can’t confirm that as I haven’t been to Moroco myself, but in Ashley I trust. And I recognized the turmeric and cumin. For the Tero Estate side of the shop we enjoyed the 2009 Windrow Field Blend – Cab Sav 70% with Cabernet Franc and Malbec all co-fermented and the 2008 Estate Hill Block Cab Sav (with a bit of Cab Franc). Red, plummy and fruity with anise star and ‘baked tart’. Great, layered, complex. Michelle purchased, sight untasted, a 100% Petit Verdot which is purported to ‘make wine geeks swoon’. We shall see!

On Ashley Trout’s recommendation that they are ‘snazzalicious’, we paid a visit to the Northstar Winery, sister winery of Willamette’s Erath where Jan led us through a tasting of seven wines starting with the stone fruit, apricot, pear and honey infused 2011 Stella Blanca Semillon. The 2009 Stella Maris Red Blend, 2009 Northstar Petit Verdot and 2009 Northstar Walla Wall Cabernet France followed. There was a gorgeous 2009 Cab Sav and then the Merlots. A 2009 Northstar Columbia Valley Merlot and a 2009 Northstar Walla Walla Merlot. Beautiful; we left with purple teeth, recorded in the picture below.

Our final stop of the day was made on the recommendation of Michael who knows the wines of Pepper Bridge well. Things of beauty they are. Balanced, complex, layered, drinking well…need I go on? Gloria was our guide for these three wines – a 2010 Merlot with mouthwatering acidity, a 2009 Cab Sav with medium + acidity, cocoa, deep dark fruit, earth and savoury notes, and the 2009 Trine Bordeaux blend named in honour of the three winemaking families who own Pepper Bridge. Stay tuned for a separate tasting note on the Trine.

Back to the ranch we went to meet up with the rest of the crew who had been fishing. Relaxed, warm and happy. Walla Walla life is good and the wines excellent. 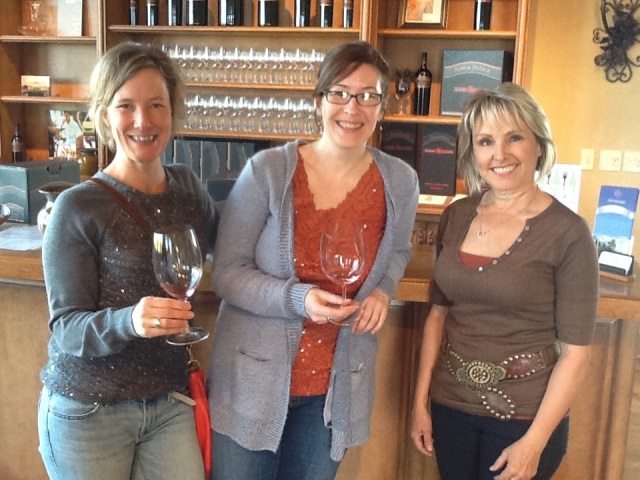 I love wine...and finally decided to do something about it.
View all posts by winellama →
This entry was posted in OTHER, Walla Walla, Washington State, Winery Review and tagged Flying Trout, Locati Cellars, Northstar, Pepper Ridge Winery, Tero Estates, Trio Vintners. Bookmark the permalink.