Let it be said I will try just about anything – at least once. 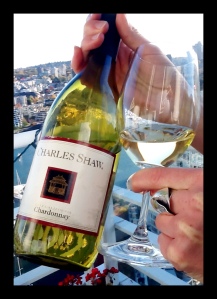 When I saw the infamous bottles of Two Buck Chuck on the shelves at Trader Joe’s during a cross-border shopping trip, I admit I was terribly curious.  I stole over to the display, sneaked a couple into the shopping cart and prayed no one saw.  ‘Cause you know I should really care what random shoppers think of my wine purchasing choices.

Really though, when you taste wine, you need to know what all of it tastes like – not just the classics, but wines of all types and quality levels.

However, once I’d justified it to myself, it still took me a year to crack one open.  And that was risky in and of itself; these are not wines to lay down and age.

Just who is Charles Shaw and why are these wines so gosh darned cheap?  There are lots of internet sites circulating urban and other myths, but fact is he was a Stanford Business School grad who bought a winery in 1974 with his wife.  When they divorced in 1991, it was sold to the Bronco Wine Company which revived the label in 2002 and sold their cheap wines to Trader Joe’s.

There was a lot of ruckus in August 2014 when the harvesting and vinification methods used were exposed – along with mention of animal bits and such being included in the process.  But, the fact is more than 5 million cases of this brand are sold each year.  Someone is buying it.

Before tasting, my first impression was that the bottle is a strange green-brown and very light weight.  Although it’s still the standard 750ml size, it has a broader shoulder and is shorter than most.  This must be to cut down on the size and weight of a case so that shipping costs are reduced.  I was also surprised that the bottle had a cork and not a screw top.

The wine is a pale lemon colour with uneven legs, a slightly alcoholic nose and has aromas of lemon, vanilla and unripe, green plum.  The palate doesn’t deliver on that though; it’s shockingly off dry with about 15 g/L of residual sugar.  The acidity is medium and although the alcohol is only 12.5%, it’s boozy.  The flavours show lemon, heavy vanilla, more green fruit and a bitter almond along with a strong oaky flavour that speaks of wood chips or added essence; no barrels were used during the making of this wine.  The finish is shallow and lightly bitter.

WSET Acceptable – and unbalanced with the unripe fruit, overt alcohol and sugared flavour.  Headache inducing, I actually poured the bottle down the sink rather than risk the full on migraine.  An industrial, manipulated wine.  Don’t age; lay this down at your own risk.

That said, it’s an ultra bargoon.  I know of other wines that people pay $8-$12/bottle for that are no better than this, so if cost is your driving motivation, at least you’ll save money.

For me though, life is too short to drink shoddy wine.  Once was enough.

I love wine...and finally decided to do something about it.
View all posts by winellama →
This entry was posted in California, Chardonnay, WHITE and tagged 2 buck chuck, 3 buck chuck, california, chardonnay, charles shaw, white wine. Bookmark the permalink.